My name, my nickname

In the late 1990s, I was a Peace Corps Volunteer in the Republic of Vanuatu in the South Pacific. I lived in Liro Village on Paama Island with my wife, Erin. We joined Peace Corps as a married couple. We learned about different styles of communication – we spoke Bislama, the lingua franca of Vanuatu, and we used nonverbal cues such as eyebrow flickers to say ‘yes.’

When I first introduced myself to the sixth graders of Liro Primary School, I explained that Zuiker comes from the Dutch word for sugar. The students had a hard time pronouncing Zuiker (ZIE-ker), so I suggested they just call me Mr. Sugar. Later in the term, when I bought a pig — I wanted to raise the same animals the villagers did, so I had chickens, a dog, a cat and a pig — I asked the students to name him. Mistersugar was the consensus vote.

After traveling around the world, Erin and I returned to the U.S. in December 1999, just before the dotcom crash. But it was the right time for me to get hooked on the web.

My father, Joseph Zuiker, was a Peace Corps Volunteer in the 1960s in the Dominican Republic. His memoir is Step to Freedom - I wrote the Foreword about how he inspired me to be a PCV.
From There to Here tells how I communicated on Paama, and lists the stops on our around-the-world trip.
For another version of my naming story, read the post Naming Rights.
January 2019.

As a way to connect my far-flung family members and honor my dying grandfather, in the summer of 2000 I launched a family website called Zuiker Chronicles Online, and I began to write a weblog. After a few years, I renamed my blog the Coconut Wireless and moved it to my personal site at mistersugar.com.

For more than 13 years, I blogged to broaden my communication and technology skills, to improve my writing, to express myself and share my observations and, perhaps most importantly, to build community.

I believe blogging is best when it leads to face-to-face conversations, a hopeful hypothesis explained in this spoken essay that I recorded in October 2013:

I took a blogging and social-media sabbatical, from early 2014 to late 2015, to focus on my health, my family and my job. I am once again writing at zuiker.com.

My essay When blogging, face the conversation and my presentation Let's be social together explain my grandfathers' influence on my blogging.
I learned the importance of shaking hands.
Triptych: three reasons for me being me answers a friend's question about why I work so hard to promote blogging.
What I learned on my blogging and social media sabbatical, and Zuiker Chronicles redux.

My Peace Corps service as a rural community education volunteer and my online life as a blogger led me straight into organizing online communities. In grad school, I started gathering other bloggers together to talk about how and why we used blogs to share our interests with the world. After our Triangle Bloggers Conference in 2005, I created BlogTogether to facilitate regular meetups, an annual BlogTogether Backyard Barbecue, and Blogging101 and other events to give these tools to others.

In 2007, BlogTogether spawned an annual gathering of science bloggers and anyone else who wanted to discuss science and the web. I partnered with Bora Zivkovic on this conference, and we would eventually call it ScienceOnline. In 2012, after six annual conferences, Bora and Karyn Traphagen (she joined us in 2010) and I launched ScienceOnline as a nonprofit organization dedicated to sustaining the community that grew up around the conference and expanding around the world. I was a cofounder and chairman until March 2014 (ScienceOnline was dissolved in October 2014).

In addition to the many volunteer hours I put into ScienceOnline, I also organized food blogging events (featuring author and chef Michael Ruhlman) and The Long Table meals. When I turned 40, I began a decade of narrative, which led me into organizing storytelling shows called Talk Story and Voices of Medicine.

I did these activities as one form of community service, because I believe in facilitating connections, conversations, collaborations and communities - which David Kroll captured beautifully when he wrote and recorded this song about my community-organizing vocation:

“The Web has evolved into a tribal Internet of passionate bloggers like Zuiker, and he has become a sort-of local brand. He's a quiet visionary. He's a low-key doer. He's a let's-get-together-and-see-where-this-goes guy. It's the Zuikers of this new, interwoven world who may play a significant role in determining how far Web 2.0 goes from being a sociable network to a social force.” — Dan Barkin, News & Observer
Learn more about ScienceOnline, Talk Story, Voices of Medicine, The Long Table and my decade of narrative.
My blog post about the four Cs explains what I've learned about overlapping networks.
Hear more music from David Kroll here.

My work and education

I am employed as the communications director for the Duke University Department of Medicine.

I've also worked at the Carolina Population Center on the MEASURE Evaluation project, the College of Agriculture and Life Sciences at N.C. State University, Northern Ohio Live magazine in Cleveland (I was the editor) and Hawaii Medical Service Association.

I have a masters degree in medical journalism from the University of North Carolina at Chapel Hill, and a bachelor's of arts in communications from John Carroll University.

Visit MedicineNews.
View my work history.
My thesis reporting project was a 12,000-word narrative feature about acute HIV infection and a rise in HIV incidence in North Carolina college students.
I contracted dengue fever, described in Bitten by the research bug.
Reaching for the Stars is my favorite Hawaii dispatch.

I am married to Erin Shaughnessy Zuiker, JD, MPH. I met Erin at John Carroll University, and when she mentioned she wanted to be a Peace Corps Volunteer, I fell madly in love with her. Twenty-five years later, I'm just as smitten. Erin is a health care attorney.

My family is the reason I'm always smiling. Here we are in Big Bend National Park in August 2014. 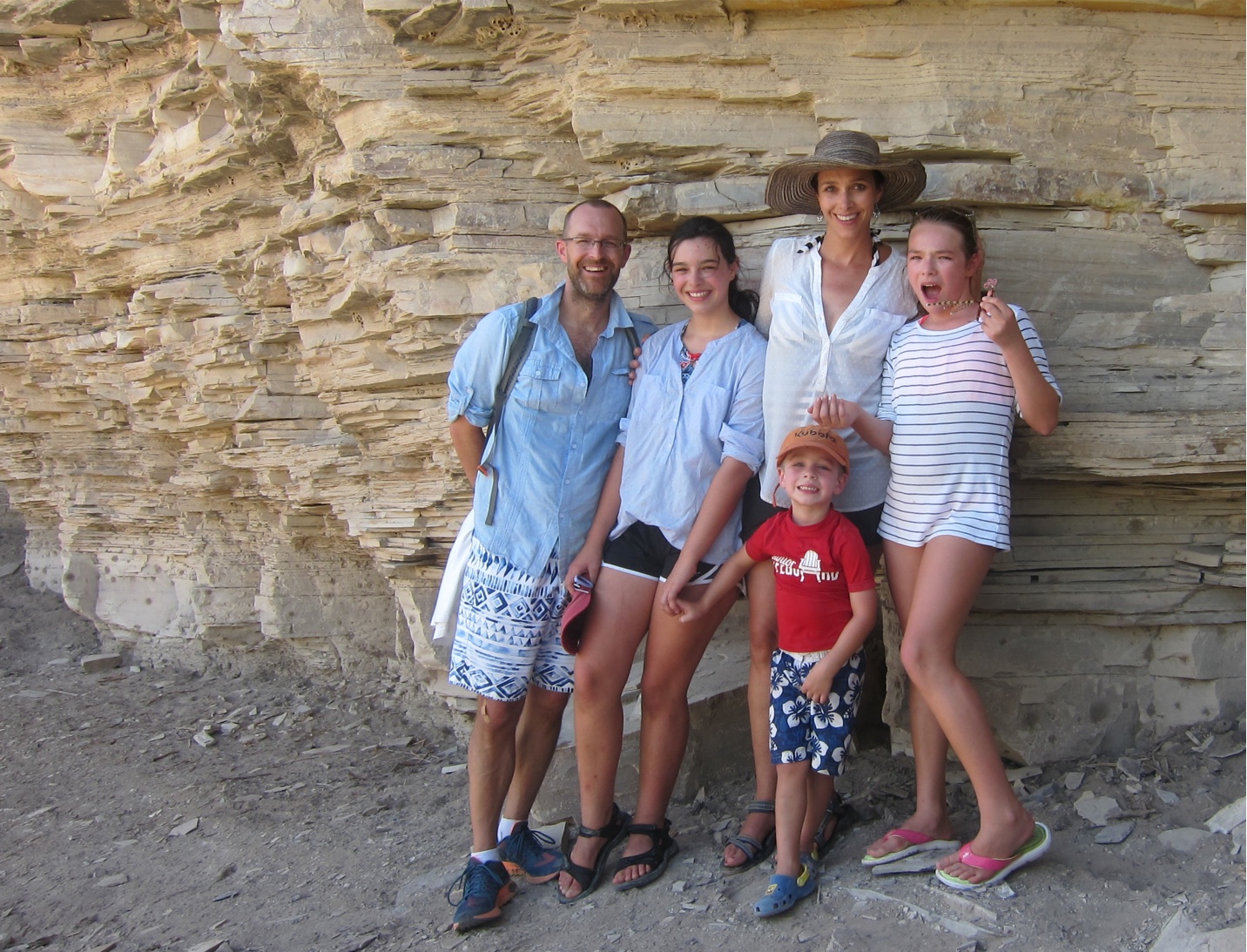 Erin and I took our children to Vanuatu and Australia in 2018. It was an epic trip. Read about it here.

Thank you for reading all the way to the bottom. If you wish to know more, you could read this extensive Q&A: Crossing a river with Anton Zuiker. For more of my writing, search or browse the Archives on mistersugar.com.